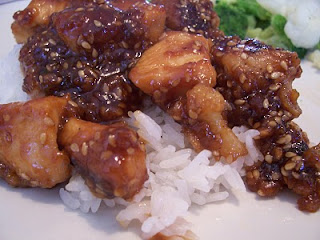 Saw this recipe a few weeks back and put it on my list of things to try. We like chinese food, but

1. hate the prices (when you are feeding a family of 6, 2 being full grown men/boys) and

2. sometimes it can be really fattening or the chicken can be a little junky.

What I loved about this recipe... the taste.

What I didn't love.... coating and frying all the chicken pieces.
When I try this again, I think I will cut my chicken into pieces and then just cook them in a pan with a little olive oil. Remove the chicken, make the sauce, replace the chicken in the pan to coat with sauce. Then serve over rice. This makes the recipe much easier (don't you hate the smell in your kitchen after frying stuff) and much healthier. Yes, the crunchy battered coating is delicious, but if you are lazy like me, this is a good alternative. Or maybe I should say I am looking for a healthy alternative. Doesn't that make me sound more posh?

The sauce was easy and very tastey. I cut the oil down by half and doubled it as I wanted enough sauce to drizzle over on the rice when serving. I actually doubled the recipe, so really I quadrupled the sauce recipe.

Step 1: In a large bowl mix all batter ingredients together until smooth. Cover and allow the batter to site for at least 30 minutes. Add the chicken to the batter tossing to coat.

Step 2: Heat a deep fryer to 350 degrees. Fry chicken bits in patches for 2 minutes or until batter becomes firm. Drain on paper towels.

Step 3: To make the sauce. Heat 1 ½ tablespoons of oil in your wok. Add garlic and ginger and stir fry for 30 seconds. Add salt, honey, vinegar, and water. Mix well. Combine 1 teaspoon of water with 1 teaspoon of cornstarch. Add to the sauce and Simmer for 2 minutes.

Step 4: Coat chicken with the sauce and garnish with sesame seeds. Serve with white rice.
(Makes 4 servings)
Posted by Tfamily at 12:36 PM 2 comments: 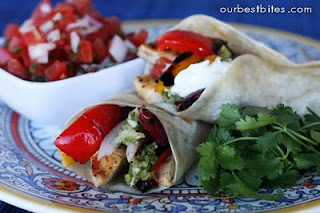 This recipes comes from one of my favorite food blogs ourbestbites.com. I've made it twice and the hubs has raved both times. He said if he closed his eyes he felt like he was eating fajitas at a good restaurant. I think it's especially delicious because you marinade the meat (I used chicken) and vegetables beforehand and then grill them all which adds a lot of yummy flavor. If you are a fan of Mexican food, I would definitely give this recipe a try!

Measurements of meat and vegetables are approximate. Adjust depending on your preference and the number of people you’re serving. This will serve about 4-6.

*If you’re not familiar with liquid smoke, you can find it near the bbq sauces. Don’t make this without it! It’s definitely one of the key components. It makes things yummy and smoky and super flavorful. And if you’re wondering, it actually is real smoke in liquid form. Interesting, eh?

Place meat in a zip-top bag or shallow dish. Place vegetables in another. In a medium bowl, combine all marinade ingredients and whisk well. Reserve 3-4 Tablespoons of marinade for later use. With remaining marinade, add a splash to the vegetables (enough for a light coating) and the remaining to the meat. Marinate for 4-6 hours and up to overnight.

Preheat bbq grill (my preference), indoor grill pan, or large skillet. If you’re using a grill, place everything on at the same time. If using a skillet, slice peppers and onions first. Cook chicken for a few minutes on each side until cooked through and remove from pan. Cover with foil to keep warm. Add vegetables and cook until crisp tender.

Remove vegetables from cooking surface and slice. Slice meat. Toss with reserved marinade and serve along side any or all of the following:

No, it isn't healthy.

Yes, it is delicious.
I attempted once before to make a recipe like this. Of course it was when we had company over and it earned a "fail" award. It was to greasy and never really set up.

This was wonderful with a scoop of vanilla ice cream and a little chocolate sauce dribbled over the top.

Vanilla ice cream, or sweetened whipped cream for serving (a must! I prefer ice cream)

Bake for 55 to 60 minutes or until knife inserted halfway between edge and center comes out clean. Cool on wire rack or serve slightly warmed. Serve with ice cream or whipped cream.

*There have been several comments about pies turning out runny. First and foremost, follow the instructions, completely (no margarine or anything from a tub!) I’ve made a million of these and never had that happen so I honestly have no idea. The recipe is correct as written, it comes straight from Nestle! The only thing I can think of is that altitude might be a factor. One reader suggested adding 2 Tbs of flour if you’re at a high altitude. If anyone finds that solves their problem, let me know!

Our Butler family reunion is in less than a month. As is customary, we are having a cooking contest. This year, since it will be summer and we want to try something that we haven't done before, we are doing.....

So let the games begin and may the best family win!

When we get back the middle of July, we will be posting the recipes and pictures of the contest. Hopefully at least one batch will turn out decent. :)

If you have a wonderful homemade ice cream recipe or any tips, please share in the comments.
Posted by Tfamily at 4:26 PM 2 comments:

We were invited to a friend's house for dinner. I asked what I could bring, she said "How about a potato dish?". Of course you can never go with the same old thing, so I found this recipe and we really enjoyed it. I like something that takes just a little preparation, pop it into the oven with little maintanence and in a bit of time you have a yummy dish.

I thought this would be good for summer with all the grilling that goes on.

Heat over to 375 degrees. Cover 11 X 17 pan with foil which has been sprayed with cooking spray. Wash and dry potatoes, then cut into cubes. Spread on pan then sprinkle onions over the top. Mix butter, honey, dry mustard, salt and pepper in a bowl then drizzle over the top. Mix so all the potatoes are covered.

Cook for 35 minutes or until potatoes are tender.

I ended up doing 5 lbs of potatoes because there were quite a few people eating (so I mutltiplied the recipe by 5). I would cut down on the butter by about maybe half as they did end up a just a little greasy. Delicious, but a bit greasy :)

I added more onion than called for because I loved carmalized onion and potatoes. You could do them in a little bigger chunks than diced.

I stirred every 15 minutes or so and I ended up cooking mine for a little over an hour. I like them a little brown and carmalized. Sprinkle a little extra salt and pepper at the end to taste.

Since I have all my children back at home, I am attempting to make a hot cooked breakfast. When you only have 2 children and they don't usually like eating a big breakfast, it makes it a little tougher to put the time and energy into doing anything to complicated, especially when you are NOT a morning person.

I found this recipe at Multiply Delicious and thought I would give it a try. It was a fun take on an old favorite and a big hit with ALL the kids. Granted, it does take a little bit more work cutting the bread into cubes and cooking them individually. But because of this, it becomes a finger food and great to grab and eat when you children are running out the door to school or work. I do have a few recommendations that I will post at the bottom.

In a large bowl, stir together the sugar and cinnamon. Set aside.

In a large shallow bowl, whisk together the eggs, buttermilk, milk, vanilla, and salt until blended. Place the bread cubes in the egg mixture and using a large spoon, toss gently until the cubes are evenly coated and all the egg mixture has been absorbed.

In a large frying pan over medium heat, melt 1 tablespoon of the butter. Add half the coated bread cubes and cook, turning often, until golden brown on all sides, about 5 minutes. Transfer the cubes to the bowl holding the cinnamon sugar and toss to coat. Repeat with the remaining bread cubes and 1 tablespoon butter.

Here are my suggestions:

First I think I would cut these into strips instead of cubes. Then you could eat them like French Toast dippers. They would be easier to cook (not as many things to turn), but they could still be a finger food and you could still roll them in the cinnamon sugar.

In the recipe it says to put half the bread cubest into the batter then into the pan. I felt mine got a little to soggy. Even after cooking all the edges slowly, they were a bit to mushy inside for my liking. But this is coming from a girl who doesn't like runny eggs :) So, the fact you have now cut your bread into strips, it makes it easier to dip them individually into the egg mixture, then put them into the pan without to much soaking.

I would also consider adding 3 or 4 eggs instead of just the two. But I do like mine a little thicker and eggier (is that a word?).

I also served mine with THIS SYRUP, instead of the maple. You already have the buttermilk, so whip up a batch of this. Just remember to put it in a larger pan because it at least doubles while boiling and you don't want it to burn or bubble over. You can keep this in the fridge and is yummy on ice cream or just eating with a teaspoon when not on a diet :)

Posted by Tfamily at 3:41 PM No comments: