My family was slowly coming home one at a time as I finished fixing dinner. There was some talking and hanging out until I asked my husband to pull the pork out of the oven and cut it up. As soon as he took a nibble, which he is notorious, he said it was really good and told all the kids to come and eat because dinner was going to be good. That should tell you that this is worth trying. 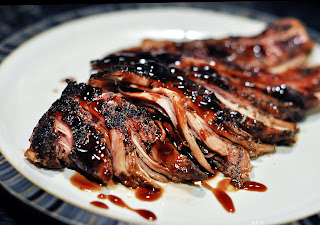 Brown Sugar and Balsamic Glazed Pork Loin
Ingredients:
1 (2 pound) boneless pork tenderloin (or regular pork loin)
1 teaspoon ground sage
1/2 teaspoon salt
1/4 teaspoon pepper
1 clove garlic, crushed
1/2 cup water
Glaze
1/2 cup brown sugar
1 tablespoon cornstarch
1/4 cup balsamic vinegar
1/2 cup water
2 tablespoons soy sauce
Directions:
Combine sage, salt, pepper and garlic. Rub over roast. Place in slow cooker with 1/2 cup water. Cook on low for 6-8 hours. About 1 hour before roast is done, combine ingredients for glaze in small sauce pan. Heat and stir until mixture thickens. Brush roast with glaze 2 or 3 times during the last hour of cooking. Serve with remaining glaze on the side.
The changes I made, was I used a 5.5 lb pork loin from Costco. When I took it out of the package I realized that it was 2 loins tied together with string. I cut the string off and rubbed each portion with the rub. For some reason my crockpot doesn't cook real quick, so I put the loins in an oven proof pot with a lid and cooked it in my oven at 300 degrees for about 5 hours. Then the last 30 minutes before serving, I mixed up the balsamic sauce in an microwave proof bowl, microwaved it for  1 1/2 minutes, stirred and microwaved it for another 1 1/2 minutes until it was thickened. I turned on my broiler and put the pot with the loins on the bottom rack, kept glazing and turning until it was a little brown and yummy looking. My husband then removed it, cut it and served it with the rest of the glaze... which is to die for. I would make the glaze for chicken too.
Posted by Tfamily at 9:34 PM 2 comments:

I think just the fact I cooked something with "diablo" in the recipe makes me cool. When the kids ask what is for dinner, don't you just want to say "Diablo Chicken" and then let them mull that over until dinner time?

I was a little nervous making this because of the jalapeno peppers. I have a 9 year old and a few picky eaters, and thought that they might not go over so well. So I did some chicken with the pepers and some just wrapped in bacon. The pepper ones were the hit. Next time I will do them all that way. Because the jalapeno peppers cook, they really become mild, with just a little kick. Not enough to bother my 9 year old. So give it a try and maybe make a few without, just in case.

I also thought these would be pretty time consuming to assemble and was surprised at how easy they were to make. I used whipped or softened cream cheese and just stirred in the steak seasoning and chopped pecans (which I bought already chopped) in a bowl. I think it only took me about 5 mintues to assemble 6 chicken breasts.

So here is the recipe and let me know how you liked it.

Place chicken tenders in bowl, add orange juice and 1 tablespoon steak seasoning, stir, cover and set in refrigerator to marinate 1 or more hours, but not overnight. In separate bowl, mix cream cheese, pecans and 1/2 tablespoon steak seasoning, blend well by hand, and set aside. When ready to assemble, wash and slice jalapeños in half lengthwise, remove seeds, then rinse again. Fill jalapeño half with cream cheese mixture, place chicken tender on top of filling, wrap with 1 slice of bacon, and secure with large grilling skewer so that bacon stays wrapped around jalapeño. Place three stuffed jalapeños on each skewer. When finished, brush all finished jalapeños generously with barbecue sauce. Bake or grill until chicken is thoroughly cooked, approximately 45 minutes to 1 hour at 350 degrees, turning halfway through cooking time and basting with more sauce. Baste one last time about 5 minutes before finishing cooking or use remaining sauce to serve.
Posted by Tfamily at 2:59 PM 3 comments: