Made this tonight for a baby shower. They got rave reviews :) (thus the reason I need to post it, so that some of my lovely friends can get it here). We love rave reviews. Even though they have multiple layers, they really didn't take that long to put together. You bake the crust then layer the rest on and bake it one more time. Then drizzle the caramel on top. The caramel really only took about 5-7 minutes to cook, so don't be intimidated. 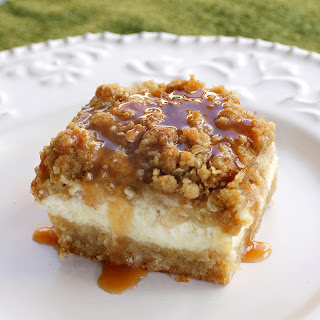 
Base:
2 cups all-purpose flour
1/2 cup firmly packed brown sugar
¼ teaspoon salt
½ teaspoon cinnamon
1 cup (2 sticks) butter, softened
Cream Cheese Layer:
2 (8-ounce) packages cream cheese, softened
1/2 cup sugar
2 large eggs
1 teaspoon vanilla extract
Apples:
3 Granny Smith apples, peeled, cored and finely chopped
2 tablespoons sugar
1/2 teaspoon ground cinnamon
1/4 teaspoon ground nutmeg
Streusel Topping:
1 cup firmly packed light brown sugar
1 cup all-purpose flour
½ teaspoon cinnamon
1/2 cup quick cooking oats
1/2 cup (1 stick) butter, softened
1 cup caramel sauce (homemade recipe below)
Preheat oven to 350 degrees F.
In a small bowl, stir together chopped apples, two tablespoons sugar, cinnamon, and nutmeg. Set aside.
In a medium bowl, combine all the streusel topping ingredients and mix until crumbly. Set aside.
In a medium bowl, combine flour and brown sugar. Cut in butter with a pastry blender or two forks until mixture is crumbly but combined. Press evenly into a 9X13-inch baking pan lined with aluminum foil. Bake for 10 minutes or until lightly browned.
While the crust is baking, in a large bowl, beat cream cheese with 1/2 cup sugar until smooth. Then add eggs, one at a time and then the vanilla. Mix well. Pour over the warm crust.
Spoon the apple mixture evenly over the cheesecake layer. Sprinkle the streusel topping over the apples. Bake for 30 minutes until the filling is set.
Cool the bars to room temperature. Drizzle with the caramel topping (or plate individual slices and drizzle with topping one by one).
Caramel Sauce:
4 tablespoons butter
1 cup firmly packed light brown sugar
½ cups half-and-half or cream
Pinch of salt
1 tablespoon vanilla
Mix butter, brown sugar, half-and-half or cream, and salt in a saucepan over medium-low heat. Bring the mixture to a simmer and cook while whisking gently for 5 to 7 minutes, until thickened slightly. Add the vanilla and cook another minute to thicken further. Turn off the heat and pour the sauce into a jar. Refrigerate until cold. If the caramel sauce has cooled in the fridge long enough to harden, warm slightly before drizzling on bars.
Edited: I got this from melskitchencafe.com. I don't love using a ton of bowls (less to clean later) so I mixed my base in one bowl. While it was cooking I mixed whipped up my cream cheese mixture in my mixer, then cut up my apples in the same bowl I mixed the base. When crust was done, I poured cream cheese, then apple mixture, then mixed streusel in apple bowl (used the same bowl 3 times) and finished with that. So I onlyh needed one bowl and my mixer.
The caramel might seem intimidating, but it really wasn't that tough to do. It came together in just about 7 minutes. Cook to just under soft ball stage so they it is thick enough that it doesn't run off the bars. If you don't want to go to the trouble, I suppose you could just using ice cream topping.
By Tfamily at November 03, 2011

Email ThisBlogThis!Share to TwitterShare to FacebookShare to Pinterest
Labels: dessert

Fantastic! Made them for Easter per my husband's request & they were a hit