Someone posted this recipe on Pioneer Woman's Tasty Kitchen and we LOVE it! We first had something like this on our cruise many years ago and we have been looking for a good copycat recipe ever since. This one is so good and really easy. When you cut into the cake, the gooey chocolate middle oozes out. Yum! Give it a try! You will not regret it. 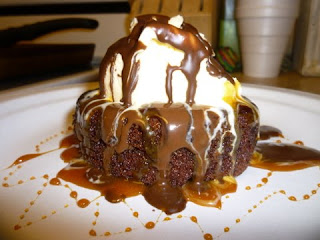 Preheat oven to 425 degrees.
Spray 4 custard cups with Pam and place on cookie sheet.
Microwave chocolate and butter in large bowl on high for about 1 minute, until butter is melted. whisk until chocolate is also melted.
Stir in sugar until well blended. Whisk in eggs and egg yolks. Stir in flour.
Divide between cups.
Bake 13-14 minutes until sides are firm and center is soft. Let stand 1 minute.
Combine sugar and heavy cream and whip until stiff.
Invert cakes on dishes and top with whipped cream.

We skipped the whip cream and ate these with vanilla ice cream and chocolate syrup. I would highly recommend it this way!
Posted by Steff at 7:58 PM 8 comments:

I was quickly trying to find something to make for dinner the other night, when I ran across this. I wasn't 100% convinced it would be good, but thought that we like pasta and we like enchiladas, so let's give it a go.

It was easier than rolling and make enchiladas and tasted really good. Got compliments from my husband, but my 7 year old thought it might be a tad on the spicey side. We just put a little more sour cream on hers. I think if you were concerned, you could cut out 1 of the cans of green enchilada sauce and substitute with cream of chicken soup.

This recipe made enough for dinner and then I put the rest in a covered dish to heat again in a couple of days.

Hope you enjoy it as much as we did. 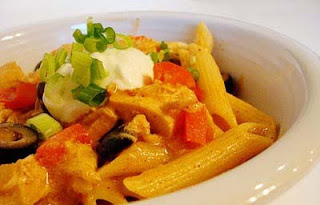 *Plan Ahead: the recipe calls for cooked chicken so use leftovers or plan enough time to cook the chicken beforehand.

Bring a large pot of water to a boil. Cook the pasta until tender. While the pasta is cooking, heat the oil in a large nonstick skillet and add the onion. Cook for 2-3 minutes until onion is translucent. Add the garlic and red pepper and cook for another 2 minutes, until pepper is barely tender. Add the cooked chicken, green chilies, spices, enchilada sauces and olives. Let the sauce simmer for about 8-10 minutes. Add the sour cream and cheese and heat through, until the cheese is melted (but don't boil!). Pour the sauce over the hot pasta. Garnish with extra sour cream, cheese, diced tomatoes, green onions or crushed tortilla chips.

BTW, I got this from My Kitchen Cafe.
Hope it was okay that I used her picture
Posted by Tfamily at 4:11 PM 1 comment: