Oven Baked Corn on the Cob

We were at a local town street fair and they were selling this heavenly smelling corn on the cob. It was also fun to see people carrying their cobs around by the husks which had been folded back into a handle. So of course we hunted down the source of this fun treat and paid a whopping $3 for an ear of corn. I felt for that much I should also get a few directions on how to do this at home. So I went behind the serving kiosk and talked to the oven tender (is that an official position, if so I need to hire one when I am toasting bread in the oven because I always burn it). He just takes the ears of corn out of the box and throws them in the oven for about 30 minutes. When they are done he takes a cob out, peels the husks down so you can hold your hot cob of corn with this makeshift handle. He then brushes off what is left of the silks and hands them to the seller who rolls it in butter and gives it to the customer (the oven tender told me that there is a lot of sugar in the silks and when you remove them prior to cooking you miss out on some great flavor). There were several things to sprinkle on besides the traditional salt and pepper. Our favorite was Johnnys seasoning. But they also had paremsan, paprika, lemon pepper and so on. It was really yummy.

So I decided to try it at home. I cooked it at 450 degrees for about 30 minutes and it came out perfect. The husks did get a little brown and there was a slight odor of burning husks in the house that was easy to get rid of. But how easy is that. You don't have to peel the corn anymore. Just throw it in the oven and cook away. Give it a try. 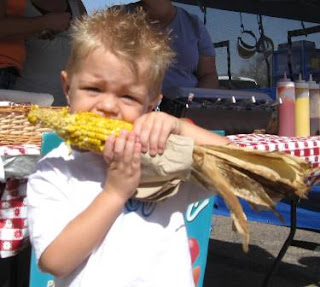 Picture is courtesy of the internet. I will post a real picture of my finished product next time we make it (which will hopefully be this week).

My husband said it was the best corn he had eaten and it was just from the grocery store. Imagie how divine to do it with fresh corn from your garden!

I read somewhere else that you can soak your corn a little before cooking so the husks don't burn, but I wonder if that would dilute the flavor. Something to try. Maybe we will try half soaked and half not and see what turns out better. Good Luck!

Email ThisBlogThis!Share to TwitterShare to FacebookShare to Pinterest
Labels: side dish, vegetable

I tried to make this a while ago but I ended up overcooking it. Oopsie. The corn in our garden is almost ready so I'm going to give it another shot. It sounds so good.